For Better, for Worse, Memoirs of the Family Court, A Provocative Problem, a Simple Solution, Blockchain

For Better, for Worse, Memoirs of the Family Court, A Provocative Problem, a Simple Solution, Blockchain

The Immutable Record of Necessity 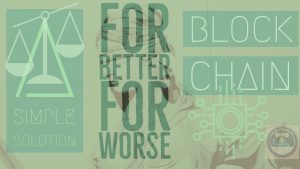 For anyone who has had the unfortunate experience of a contested divorce, I am deeply sorry. There is not one person I have encountered that ever surfaces from the deep abyss of the contested Family Court system, riddled with a lack of efficacy, collusion, and lacking evidentiary standards, as a winner. Sadly, if children are involved, they, the children, are ultimately the biggest loser. If you are one of the few that believe that marriage is a magical fairytale-land of ‘unicorns, rainbows and lollipops,’ kudos to you. Any married individual I have encountered, either past, present, or most likely, future, will tell you, no, a happy marriage takes work. Moreover, most divorced individuals will tell you,

(T)hey never knew just how bad things could be twisted in the ‘Court system, enter Blockchain.

In marriage and subsequently divorce, expectation management is key. If it were required to peruse the Family Court sites, and resources such as The Liz Library, thereby creating an awareness and education of the legal issues that can ensue from reading real stories of same, perhaps the expectations of the optimistic, impending nuptials would be mediated; or in the least, these individuals would bee-line to their nearest Family Court Attorney, and set up a Prenuptial Agreement, on the Blockchain, of course, see Part III.

New PSA: Prenups are for Everyone

You do not want to be caught in jurisdictional limbo. While I am not an Attorney, nor do I give legal advice, I strongly recommend you speak with an Attorney on their opinion. This is particularly of great importance when considering clauses of your future. Every agreement should include provisions citing 50% custody and placement executable upon the birth of the first child.

In short, when you are in agreement, get that consensus in writing. You would be astounded what is stated in these highly contested Court battles, and the years of litigation it takes to prove a simple common sense agreement was created back when in the day, again, enter Blockchain. After all, why would you agree to have a child and not have 50% legal right to said child. Surely the lay person can see through this, why not the Judiciary?

Alas, until Prenups on the Blockchain become a requirement of obtaining a marriage license along with the requirement of reading at a minimum, one hour of Court Docket research, the lack of expectation management will continue, and is akin to entering into an investment that was poorly disclosed.

Preparing in this manner mitigates, educates and properly discloses the legal risks of matrimony, of which there are many. These over inflated expectations bear significant cost, both tangible and non. They produce a bubble as big as the famed bubbles of yesteryear, circa the 2000–2002, Dotcom, or, 2007–2009, Housing & Credit Crisis. Each, in turn, forced its own reform, so why not marriage and the Family Court?

There are two primary reasons for the lack of reform within the Family Court system. First, it is a veiled problem that you must experience, in order to process the sheer magnitude thereof. In other words, it is difficult to imagine how two individuals who loved each other could then use simple nuances in malicious, distorted, dishonest, and manipulative ways to remove the other parent from their child’s life, in an act of war on character. Why these allegations are allowed baffles me to no end. To better illustrate this, think how it must feel to watch an inevitable train wreck, but not be able to stop the trajectory, in other words, without experiencing this, it all seems implausible or full of conspiracy, sadly, it is neither. We are not talking about your average ‘run-of-the-mill’ break of vows,

But rather, we are talking about the battle that intensifies as a function of the time spent in the Family Court system, overburdened and full of inefficiency, Blockchain would rectify and incentivize compromise through the use of smart contracts. This, in turn, would free up resources and offer speedier resolution, stopping the misuse of justice at its root.

These victims of circumstance, generally the optimistic and naive, are what most studies cite as the ‘lucky’ 10% of all Divorces. Many in this cohort are divorcing a narcissistic or truth-avoidant, spouse, who will mobilize innocent children in their all-out assault on the other parent. And, sadly, hey; it is lucrative. The average contested custody cases involve lawyers, experts, and forensics of one type or another, each profiting off of the inefficiency of the Court and each other. Authoring reports based on the data that is outright denied Discovery thereof, a procedural, due process right, which is easily argued away. See Defamation & Denial.

The experts repeatedly delay and deflect as if it was their inherent duty, but then, again, many of their credentials are questionable at best to begin with, and conveniently lacking ‘material disclosure,’ therefore, should this come as a surprise since each endorses both the former and latter and profits handsomely off of such? The question then, becomes, are these professionals mere victims of circumstance, simply surviving in the flawed structure, the Court, which incentivizes this behavior? Or, conversely, are they themselves the fundamental root of this lack of ethics that ensues, perpetuating the well guarded secret, the disparate glitch of justice, where the winners and losers are decided long before any facts are obtained?

Further, is it pure coincidence that their neutral facts and reports magically substantiate their cognitive biases of the greenest pockets? Either way, Blockchain offers a solution throurgh the inherent trust, transparency, and immutability that are synonymous through its solutions in multiple other realms. It is time in the wise words of Office Space, to

Whatever your position, the analytics are clear, see Premonition.ai, the number one factor in any case is the relationship between the Judge and Attorney. This only reinforces what all legal research and other litigation analyses point out. There is a grave lack of trust, transparency, and immutability within the current system. Ironically, all of these are solutions of Digital Ledger Technologies, AKA Blockchain.

While legal analytics can be performed by longhand through careful analysis, it is more easily and efficiently achieved through AI which interprets vast quantities of data instantly, see Premonition.ai. The company not only recognizes this, but has partnered with a sister company to assist Family Court litigants in finding a properly prepared Attorney for their case, or more specifically, their particular Judge, a fact that lies in big data.

Thus, Premonition.ai is righting this wrong through Artificial Intelligence. But, what if it could further turbo boost these superpowers through Blockchain technology? What if there existed an easily visible report of which party paid, chose, and was represented; what experts were retained and the frequency, with which they correlate to each Attorney; what if their credentials were mapped in a way so that when under oath, they could not cite they were an expert within their field, but all records of such have not been produced, and yet fail to even offer a ballpark number of cases? What if each of the complaints of ethical violation were available without the burdensome Freedom of Information Act (FOIA)request? What if there was a record of denied Discovery? What if all of these were on an immutable record of trust, and further, what if state funding was tied to such? Of course, not the reports themselves, simply the credentials and trends of professional decisionmakers. Would this then, in turn incentivize ethical behavior that upholds the integrity of justice, offering resolution and equity?

In conclusion, a brief look through the Family Court dockets and research demonstrate that the fields of justice are so bright the Court appears to wear shades… of GREEN.

Now that this aberrant justice is exposed, let’s explore the implications before we turn to the intricate details of the solution, Blockchain.

For Better, for Worse, Memoirs of the Family Court, A Provocative Problem, a Simple Solution, Blockchain was last modified: January 2nd, 2019 by Erin Huber
Share