“It was immediately clear Premonition was onto something special,” says Shawnna Hoffman, IBM Cognitive Legal co-leader. The two companies had been partnering on various projects in the legal space when Premonition co-founder Toby Unwin realized that advances that Premonition had made in fixing America’s legal system were applicable to the field of medical records, and he now has a patent pending on the innovation.

While several companies are aiming to tackle healthcare records via blockchain technology, Unwin realized they would have difficulty succeeding in the marketplace due to the overwhelming complexity of interacting with thousands of incompatible, legacy healthcare data formats, as well as the lack of economic incentives for users to adopt. “He solved both problems in a completely unexpected way,” explained Hoffman. “It was elegant and insightful.”

“We rapidly realized we were out of our depth in healthcare,” explained Guy Kurlandski, Premonition’s co-founder and CEO. “We don’t know where to start with areas like HIPPA compliance and having cracked the problems that have eluded the industry wasn’t enough to get this over the finish line. It was time to turn to our friends at IBM.” The Watson team immediately brought in Integra Ledger, their blockchain partner. 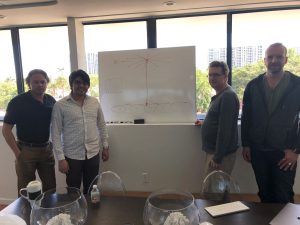 “Using an industry-governed, permissioned blockchain was an obvious choice for Premonition, given the need to interact with thousands of healthcare companies in a highly trusted way, preserving the privacy of patient records,” explains David Fisher, Integra’s CEO. “Toby had solved the main technical challenge facing healthcare blockchain ventures – the need to interface seamlessly with thousands of legacy data formats. He also saw how blockchain technology would enable Premonition to apply their market-disrupting innovation while absolutely respecting the requirement that healthcare information remain decentralized, private and secure. Blockchain’s decentralization, security and encryption standards made it a natural solution. This could never have been done even a few years ago, or before the arrival of Premonition.”
Integra sent a due diligence team to Premonition’s Miami headquarters just two days after the initial presentation to audit the firm’s auto-normalization AI. “Technically, this is one of the most impressive things we’ve ever seen. Premonition is years ahead of the rest of the industry,” said David Berger, Integra’s chief technology officer. The visit culminated in integrating the Premonition system with the Integra Ledger blockchain. “The process was very smooth and well thought out. Integra has great technology,” explained Marcelo Triana, chief technology officer of Premonition.

Technically, this is one of the most impressive things we’ve ever seen. Premonition is years ahead of the rest of the industry – David Berger, Chief Technology Officer at Integra

The company envisages the new healthcare venture as a spin-off from Premonition’s industry-leading legal platform, with IBM and Integra Ledger as key strategic partners. Premonition set records with its oversubscribed and record-breaking $100 million seed valuation in 2015, and co-founders Kurlandski and Unwin believe the healthcare opportunity will be far greater than law. “We’re talking about the biggest data problem, in the biggest industry, in the biggest economy. This deal is going to break some new records,” Kurlandski commented, adding that the size of capital raise is not being publicly disclosed but is well into the nine figures and on track to be oversubscribed, consistent with Premonition’s 2015 raise.